Well I have come to the conclusion (like I haven't come to the same conclusion before) that I can't do everything. What a revelation that is. For the past two weeks I have been so busy that blogging could not be added. But here is the latest. I'm sorry that this post is so lengthy but I am just so excited about this event.

The year has started out with a most exciting event - VogueKnitting Live! The first knitting event held by Vogue Knitting. I was so excited for this event because Vogue has been a part of my life since my sewing days. Vogue sewing patterns were my favorite because of the styles and it was always fashion forward. And since my return to knitting the VogueKnitting magazine is my favorite because of the same reason. I don't have all that time and money to make a lot of the things I see because of all the cabling work, intarsia and the amount of yarn needed. But I'm always gravitating their way and I get a couple of garments made from the magazine even if it is just a scarf. So when I found out that volunteers were needed I jumped at the chance to be a part of the first event. Well, for me I was not disappointed.

I didn't take any classes because as I tell people that I am a starving artist. That means to do what you like to do sometimes takes sacrifices - but it's all good (for now). To be there with over 3,000 people that signed up was very exciting. VogueKnitting had the top teachers come like Debbie Bliss, Lily Chin, Nicky Epstein and a list of others. There were also the Representatives from Knit and Crochet Now show - Brett Bara and Drew Emborsky. I got to talk with the "Crochet Dude" for a couple of minutes and in that time I could tell that he is such a down to earth guy and very nice. I enjoyed meeting and talking with him.

I was there on Thursday for the volunteer orientation meeting. We were greeted by Miki Hodge and Beth Ritter, the two contacts from SOHO Publishing Company that were the coordinators for the event. They are terrific people and great at their job. They work great with people and when problems come up they stay calm and collective ready to put out the fires - and we had some. There were 47 volunteers. We got a great shirt for us volunteers, brochure for the event and our badge. 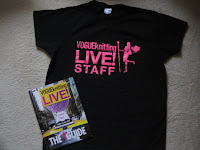 Then for that afternoon to early evening I worked at the registration desk. I was helping to put badges together for the attendees and I was so surprised at the number that would be coming from overseas - Wow! The ones that had regestered started coming in the door and all happy as they picked up their needed information and badge got me even more excited. And if they purchased a certain package then they got an extra added treat of a bag that included a water bottle and VogueKnitting's brand new, hot off the press book 'Knitopedia - the ultimate A to Z for knitters'.

For Friday and Saturday I worked all around to direct people and answer questions. I met a lot of great excited people. I enjoyed hearing about what classes they were taking, even though at times I was just a tad bit jealous wishing it could be me. Hey I'm only human. But also it was like a fashion show. So many people wore items that they themselves made. I was always telling this one and that one that I admired their piece. Some were very intricate and others simple yet the color or a detail made it stand out. 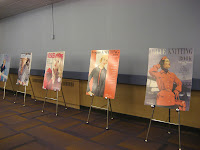 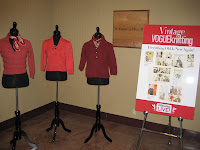 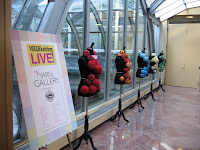 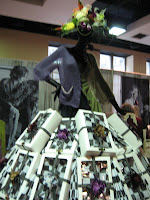 Well, as usual with a place that is featuring what you love you connect with people. I have zoo buddies, why not event buddies. There is always someone that you connect with more. This was no exception. I connected with a couple of the volunteers. I had a lot of fun even though it was a lot of work. I went out to lunch with one of the volunteers and had a great time talking and sharing. I connected with another and we were shopping buddies. I didn't buy anything but when I am with someone I can do window shopping. I don't like to shop (yes I know that is strange) but I will go around with someone else and then I will look at the same time. So she brought and I looked. And then another one I spent time with attending one of the free demonstrations on lace knitting. These were very short windows of time since most of the time we were busy. By the end of the event I was running on fumes. I was not scheduled for Sunday so that was my relaxing day at home.

The highlights of being a volunteer was I got to see the set up of all the vendors and a preview of what they were going to display. To see all of their sample garments, the styles, color combinations and of course the yarns used got me all excited to want to do more with my needlearts. It was exciting seeing all the vendors building their areas up. The boxes they had to pack - Wow is all I can say about all that work and time put in for a show.

Of course with this being the first event not everything goes as planned. You can write a plan out, but when it comes to reality it can go up in smoke. The hotel had some issues with the elevator and escalator - that is one of the worst things that could happen with over 3,000 people there and some that desperately needed those accommodations to be in working order, like the elderly and handicap. And the hotel staff did not deliver things on time - not good for business. That just puts more stress on the coordinating team because those were things that were out of their control. But in my opinion, all in all the event was a huge success. Do you know they are having one in Los Angeles California this September 23 - 25. If you will be in that area or you live in California then look on the website for details. 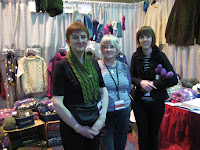 I got another exciting opportunity and that was to personally help one of the vendors set up. This was a friend of one of my guild friends. Ann O'Maille representing 'O'Maille - The Original House of Style'. Check out their website for great yarn and ready-made garments. She came all the way from Ireland for the show. She is soooo nice and her sister Mary was great to be with. I told my friend that she will have to move over a smidgen because I have definitely adopted them because they are good people. I also met Ann's daughter who is living in Boston here in the states. She is so nice. They are down to earth and I can agree with them that they have a sense of humor. It was so much fun helping with the set up but especially to see the garments she brought over from Ireland - yes the Aran sweaters that she had a team of knitters to make. Most of her knitters are between their seventies and eighties. Unfortunately, she was saying how the young people are not picking up knitting so much. It is such a shame that our young people are so into the technology that they are loosing their moment to become our future designers and just to use the brain more to be creative. And the work that is put in to make an Aran sweater takes skill that should be passed down to future generations.

The event made the New York Times. How about that. There was classes going on, demonstrations, fashion shows and even an area for art. Check out this whale that is all knitted. 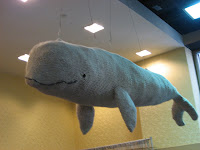 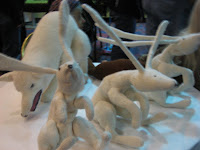 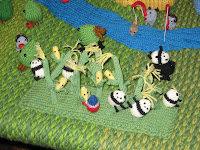 Maybe you had a chance to go or are you waiting for another event that is on your list for this year. If you don't know about the other events during the year go to Knitter's Review for the full list of 2011 events. Try to go to at least one event this year. Seeing all of your fellow needle arter (yes I made up a word) gets you all geared up to want to do more and you also see that you have a lot of company out there across the world.

It was hard to say good-bye. I did go home with some goodies though. When I went to say good-bye to my new Ireland friends I was given yarn in four different beautiful colors from her new line 'Donegal Wool Spinning Company' and a box of chocolates from Ireland. I was so excited. And we also exchanged addresses and I was invited over to Ireland to stay with them. Now that topped the whole weekend. Then VogueKnitting gave us a copy of the Knitopedia. I can't wait to delve into it and learn more. I can't wait for next year's event. I exchanged contact information with my event buddies in hopes that we can stay connected and maybe see one another at other events during the year.

After this event and looking at the list for this year's coming events how could anyone say that knitting was going away any time soon - for get about it. Knit and crochet on and have fun. This event as every other event gets me so excited to do more, to learn more and to teach more. What do knitting and crochet events do for you?
Posted by Miss Craft Diva at 10:00 AM