I was so excited this past weekend because I attended the annual New Jersey Sheep and Fiber Festival in Lambertville, NJ. I went on Saturday and had a blast. I was hesitant to go at first but then I decided to go. I was concerned because when I got there, I was at first the only one that was wearing a mask. But I wore my mask and kept going.

At our New Jersey festival it is set up with four barns. Two have the vendors set up and there is a barn for all the sheep and another barn for competitions of the different breeds of sheep.

I was meeting another friend there, but I was so glad I got there early because I got my animal fix. The sheep of different breeds were so beautiful to see, and I was in my glory just to be able to pet all those that wanted a little extra lovin. The pictures are mostly those that I got to enjoy upfront and personal. Not all the sheep wanted to be loved. Their wool was so thick, but they just enjoyed the attention, and I enjoyed the time with them. I didn’t want to leave that area. But I did have some shopping to do.

Every year they always have things going on. There are weaving and spinning demonstrations, sheep shearing, angora rabbits and as usual they have the dog and sheep gathering show. This is where the dog would show you how he gathers the sheep. I guess they didn't want the crowds to gather so they had no special time just continuous ongoing all day. I love to see how excited the dog gets to be able to do his job. He sure gets a lot of exercise.

I was pleasantly surprised to see so many vendors to choose from. I did a little damage in buying yarn and beads. It was good for the vendors and there was a good crowd that grew as the day went on. The very first vendor I came to had yarn that I wanted to make the Snefald shawl. This will be my first steeking project which I am excited to make. The picture on Revelry showed it in brown tones with a gold pop of color and that is what I wanted. So, they had those colors and that was my first purchase. Oh, but I wasn't finished. I continued right to the next booth, and she had a sale going on. Well, I couldn't pass up a sale now could I. So that is where I purchased the Light Brown Hare yarn. That's the name of the company and I've gotten that yarn before. I purchased three hanks, each was 100% superwash Merino in fingering weight and 400 yards. Two will be for another shawl and one I just don't know what I will do with that one. What is the famous sentence - it is so pretty so I gotta have it.

Then, I found my favorite booth. It had all that I wanted. That is where I got the mini hanks and medium hanks for dying yarn. This is Highland wool. I also got one hank of a yak/silk/merino blend. I always wanted to try and knit with yak. They also had Highland wool zebra stripe in fingering weight. This has over 400 yards. I purchased only two because it had a lot of yardage. But then after showing someone the yarn they pointed out that I could have gotten more and over-dyed it with another color. Oh my goodness, now that will be something else to look out for in my future purchases. The prices at this booth were great so I wish I would have gotten more. Oh well, you live and you learn.

A picture of all my goodies 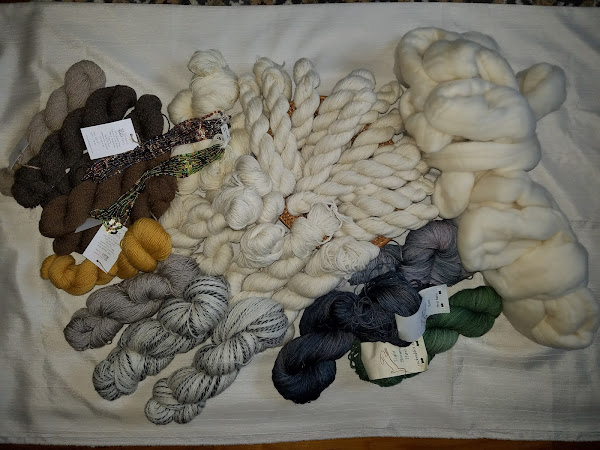 I am about to venture into another part of the craft world - spinning. Yes, I decided to do that next. I had tried drop spindle spinning and just didn't put enough time into learning how to do it. I even purchased a beautiful hand carved drop spindle which has been sitting for years. Maybe once I get the hang of spinning, I will be able to understand how to do the drop spindle. So one of my craft buddies in Australia showed me her electric one and she loves it. So there you go, I was convinced. I will be sharing more about this in future posts. There is no bordom my way, just not enough time. So, to prepare myself for that I purchased some roving.

I said I purchased beads. I forgot that there was a vendor there usually with beads and there is one for buttons. I had to get some beads but unless I had a pattern I don’t know if I have enough. I got two colors with over 1,000 beads each, so I think I can find a project to add those to. Or, I can make jewelry with them. Only time will tell.

There is only a couple of vendors for food. I usually go for the 4H Club that is usually there. They sell hamburgers, hotdogs, butternut squash soup, chili and deserts. But one thing they had which was simply heavenly was fresh sweet ears of corn. Oh, my goodness, it was so good. The best corn I've ever had. Well, of course because you are surrounded by cornfields, so it came from one of those and it tasted like it was picked right off the vine. All I can say it was a far cry from what you would get at the supermarket. There was no comparison. It needed nothing on it, cooked to perfection. Next year, I will need to bring something to wrap some up to bring home or ask them where there is a local farm that I can buy some at. The ones from the 4H Club are young but they are so nice and helpful. There was one young girl that I had to tell her how much I appreciate her inviting smile and just how she carried herself. Someone is teaching them the right thing.

I was glad I went to the festival even though there was hardly any mask wearing. It is a small festival, and I got my animal fix and yarn purchases that can last me through the winter. But it got me excited to think of next year and going again to see what treasures I can find.

Well, that’s all for now. Keep enjoying what you love and stay safe. 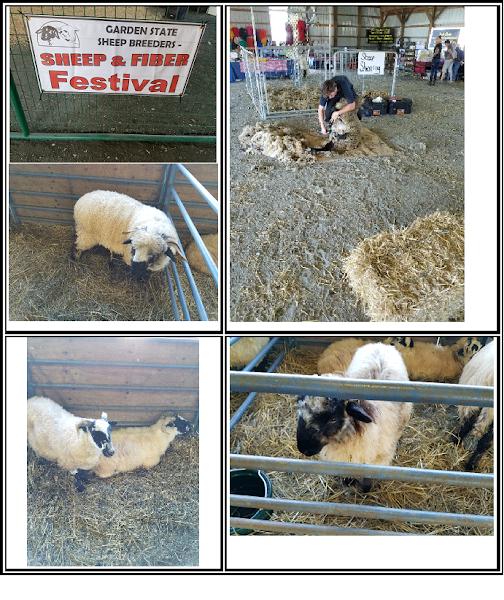 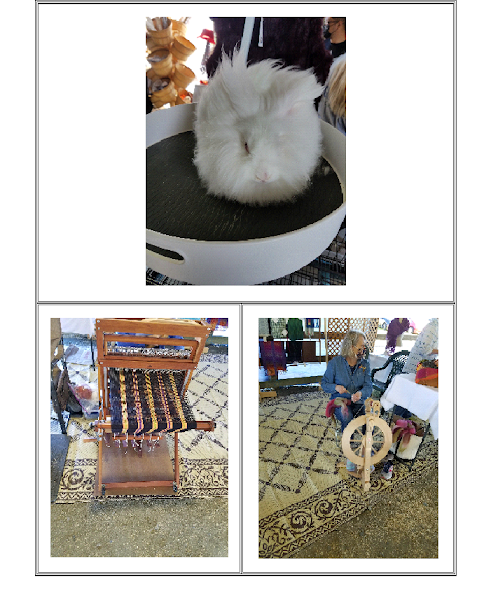