A Tribute To My Four Legged Buddies 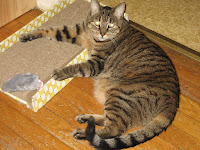 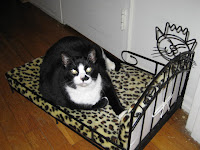 When I started this blog, I didn't know that I would be interrupted by the illness of my cat Victoria. She had renal failure. She had started to go down hill, but now it was speeding up as the renal failure was taking over.


This is a tribute to both my four legged buddies. It was December 1994 when I went to the North Shore Animal League to, what I thought, a mission to get one little kitten. Well when I got there and as I looked at all the kittens I noticed one cage with two 6 month old kittens. What I didn't know is that the black and white one already made his decision that he was coming home with me. But I wanted a little bitty kitten. So I revisited the little bitty kittens. Then I went back to the cage with the two 6 month old brother and sister team.

The black and white one got up and started his show. He started purring and rubbing against the cage. But the tiger stripe kitten just laid in the background unconcerned. So I revisited the little bitty kittens, yet again. I couldn't get the black and white one out of my site. So I had to revisit their cage. Well, this time he got the tiger kitten to get up and she also start purring. It was like he said to her: "You better get up so that we could go home with her." After seeing both of them get up and show such enthusiasm, I just had to bring them both home.


At the time I was living with my grandmother. I had told her that I was going to be bringing home one little kitten. Well I had to then sneak in two bigger kittens. But it all worked out at the end and they would be in my life for a little over 15 years.


I was trying to think of names but nothing came to mind. My aunt ended up naming them - Victor and Victoria. It fit them perfectly. Victor my male loved to play with the end of my knitting needle. He also loved to try and lay on anything I put down that included my knitting that I was trying to block on my cutting table. He was the ruler of her and she would have to take the leftovers that included my time. Victor would make her get down off of anything that he wanted to lay on, including my lap. But they loved each other and truly acted like sister and brother.


On December 4, 2009 I had to put Victor down. He had congestive heart failure that suddenly attacked his heart. I truly miss my baby. But I still had Victoria to care for. At first it was hard for both of us, but then she stated to adjust not having her brother around. And then she started to become her own. What I mean is, she could go anywhere or do anything she wanted and she did. I played with her with the end of my knitting needle and she played back, with no interruptions from her brother. She could lie on my cutting table and not be forced down. We started bonding. It was like she was a different cat. Her brother use to wake me up to eat and she would just wait for the signal. Now she was on her own, so she started meowing for her food. When she started I said: "Where did that little voice come from?"


But the weeks got tough. I couldn't afford the fluid treatments she needed for her renal failure. Even though she was on a special food diet it just wasn't enough. I tried a couple of other special foods with vitamins but she did not want it. I knew it was time, but that final decision was so hard. I spent time with her and on March 29, 2010 I put her down.


There is an emptiness in the house now. There are no meows, no pitter-patter of little paws across the floor, there will be no little paws trying to play with my knitting needles or yarn while I am working on a project. Just the memories of it all.


For anyone else that is going through any health issues with their pets, I feel for you. And for those that have to come to grips of having to make that final decision, I also feel your pain.


I have to say that one thing that truly helped me, especially that day, was having a great friend accompany me to the vet's office and spend time with me all day so that I would not have to grieve alone. My friend Diane. I so appreciate her friendship and support more than she knows.


For all you pet owners; enjoy your pets, love your pets, play with your pets and build those wonderful memories that live on past the time that you must say - good-bye.
Posted by Miss Craft Diva at 3:08 AM