Well you know it will end but you wish time could just stop when you are having such a great time and I did. It has already been a week that I've been back. It was so much what I needed and at the right time. My girlfriend wanted me to see as much as I could and we ran for it. We went to The Big Cat Rescue. If you love cats this is a place to visit and support if you could. Wonderful place and a lot to learn. I loved it because they are mostly big cats so they need a lot of space and their enclosures gave them enough to run and a couple of them were so active playing with their toys. I had to remember that these cats were pets so they would love to play more with balls and other things. But no matter they were respected as wild animals.

But it is sad also that people are still seeing nothing wrong with bringing a wild animal from the wild into their home and thinking that it is going to stay sweet and cute. This world of hurt and pain. Reality of it all stuck its ugly head up fully. Also, it was sad to hear the small numbers left in the wild of some of these cats. Human destruction is a live and well unfortunately. We did meet the founder and heard of her dedication to helping these poor defenseless creatures. If you know anyone that would love to give to a great cause this is one place to tell them about.

But anyway, back to what else I saw, we went to Sea World and experienced some great shows, USF Botanical Gardens, Dali Salvador Museum, Disney's Animal Kingdom which the bird show was great and there was a message behind it regarding our beautiful birds of the wild. We also went to a beach when I arrived and saw a beautiful sunset and went to a beach on the day I was leaving and I walked the beach and just enjoyed the last day.

I also enjoyed sitting on her screened in seating area. She has it fixed up so beautifully with all of her plants surrounding, seating and pictures. It was so comfortable. And the lizards that I enjoyed watching. Yes I am a reptile person. In the past posts I stated that I volunteered at Turtleback Zoo in West Orange, NJ for six years and the snakes were my favorite. Saying that, I was so excited when the alligator stuck his massive head out of the pond and I was talking to him - of course from sitting inside. It would get light at 7:15am and I was out there doing my knitting and crochet, drinking coffee and enjoying the view. But the different birds I saw - I love bird watching. It was a wonderful trip that brought some peace to my mind as I had time to unwind.

My girlfriend loved the crochet pineapple shawl I made for her. I used the yarn Cascade - Longwood. She is so funny because I came in the house and asked for a couple of big plastic bags and two large towels and that I needed to use the bed to block a shawl. I was using the full immersion in water blocking method. She said, "OK" and didn't ask any questions. I then held it up and asked her how she liked it and she said, "Oh that is beautiful." I then said, "It is yours." She was so surprised and happy. I wish I would have taken a picture of it after blocking because the yarn blocks great.

I did get some knitting done because my friend was doing all the driving. I finished this shawlette in the picture and I blocked it last week. This is a free pattern called Multnomah. When I pinned it down I used a yard stick to lay across the top to make sure it was even and that works for me. And a crochet accent scarf called Fisherman's Fan which was fast. I used Juniper Moon Findly DK yarn. I found both patterns through Ravelry. I love accent scarves but don't get a chance to make too many because I always see something else I want to make. 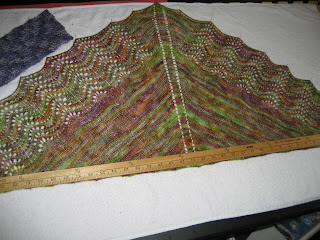 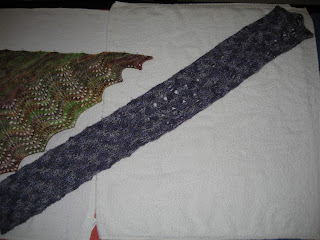