On Sunday, September 19 marked the third year that I volunteered to teach at the Harlem Crochet Out and Knit 2. It was held on the corner of 113th Street and St. Nicholas Avenue from 12pm to 5pm. I had a lot of fun. But what is a knit/crochet-out you might ask? It is an event that was started by the Craft Yarn Council of America in 1998. This is a way that people can come together and learn how to knit/crochet or just come and sit around and knit/crochet. Yarn companies donate yarn, needles, hooks, and instructions to give each person a bag to start them off. Some events have representatives from charities and you can make squares or help put squares together for blankets. Other knit/crochet-out events have fashion shows which can give you ideas of what to make or to see what is out there to make that you haven't seen. You could think of having one in your area. 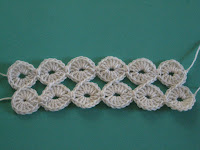 One of the women that came just loves new books so she had purchased a booklet on Yo-Yo Crochet. It reminds you of the Shell and Cluster Patterning stitch. 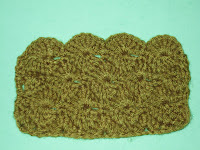 Since I had ones that understood the basics of crochet I taught the Yo-Yo crochet technique. It was fun making each section and attaching them as we went along. The project ideas in the booklet was a placemat, poncho, baby blanket and a few others. I'm not sure if I will make a project but it was fun.

The park where they had it last year was being renovated, so for this year the event was held right on the street. A tent was put up for some shade (it was hot during the afternoon), tables and chairs were set up for people to sit around and knit or crochet. This is what you call making due with what you have and still making it work. And it did and it was an enjoyable day. I got to see a few from last year and catch up to what they are making. I can't wait for next year. To keep up with when next years event will be click on this link Harlem Crochet Out.

Congratulations Crochetoutlady for another successful event.

What's going on in my area?

Smiley's Yarns is coming to NJ. Smiley's is a yarn outlet in NY, but they come to other areas like NJ once a year. They will be coming this Saturday to Hasbrouck Heights, NJ and on Sunday to East Windsor, NJ. Click on the link to go to their website if you are interested. If you go they only take CASH and nothing else. It is only from 12:00pm - 3:00pm so come early and have fun shopping. If you can't get to the sale they also sell online.

Update on our group charity at the South Plainfield Library 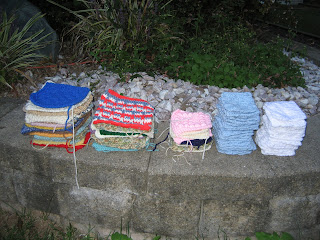 As you can see from the picture we are making progress with our squares for the two blankets we will be giving to a local charity. Not all the squares are in this picture. A couple of people are holding onto their squares until we start putting it together so there is a bunch more and we will be adding until we have enough. Our goal is by the end of October to complete one blanket and the second will be completed by the end of November. The group is having fun learning new stitch patterns as they make the squares. I'll give an update in a future post.
Posted by Miss Craft Diva at 6:55 PM