What I Learned From My Little Visitor 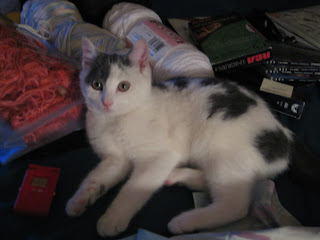 This is Pepper. Isn't he just an adorable little kitten. He is four months old. No, he is not mine. I am babysitting for a friend that went away with her family and she needed someone to take care of the little fella. Such a little thing can teach us a lot. As I watched this little fella I was amazed at the curiosity and adventurous spirit that he showed.

If you read my post on Tuesday, March 30, 2010 about my two babies you know that they were the loves of my life. I lost them at a couple of months apart shy of 16 years. So when this one came into my home it just reminded me of the past years of fun and happy times I had with my two. I'm sure there are a lot of animal lovers out there that could relate to what I am sharing.

As I watched this kitten play he was literally into everything. His first day and a half here he was scared and he hid. My friend only had him inside her home for three weeks before they went away. So he was outside then he was inside her house and then he came over to my house and each a new environment to get use to. The adjustment had to start all over again. Wednesday is my night to go to Michael's Craft Store so I had to leave him. By the time I came back I don't know what happened but he did a 360 on me. He came out to eat then he started to play - amazing. I was so happy to see that he adjusted very quickly. The next day he discovered that he could jump on the cat stand and look out the window. Then the next day he found out he could jump up on the window sill in my bedroom. In between, he was exploring the whole place jumping and leaping on places I didn't mind and on places that was a no no. Even if he almost fell he was determined to try again.

Of course, I started to think of my needlearts and what I wanted to accomplish for the next year right around the corner. Do you suffer from the fear syndrome? Do you see what others have produced with their needlearts projects and wish you could do the same? Do you stop yourself not wanting to venture out into the unknown just thinking of the mistakes you would make instead of the things you could learn? Don't put yourself down before you begin. Think of 2011 as the year of trying what is out of your box or comfort zone. Yes, I do say this a lot because I hear it a lot. Take a class (I offer classes - see post Thursday, December 16 for details), explore the Internet more, and ask more questions.

Let's do ourselves a favor and imitate this little kitten who has no fear of the unknown and is willing to take the chance to explore and have fun doing it.

"You can conquer almost any fear if you will only make up your mind to do so. For remember, fear does not exist anywhere except in the mind."

Do videnja (Good Bye)
Posted by Miss Craft Diva at 9:10 AM